How Well Do We Use Our Freedom to Choose the Reality We Create? 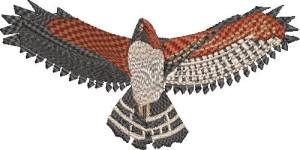 We’ve made a lot of changes since I last wrote, nigh unto a year ago.  We finished setting up our handcrafting studio and I’ll tell you about some of our first projects.  Our sad news is that Little P, the friend to Jerry during stressful times, has crossed over.  His sight and hearing deteriorated after the dog pack attack I wrote about.  He never completely regained vitality.  Jerry told me just today about a dream of seeing him again.

We enjoyed a family of deer all summer.  They would come out of the woods and venture across the horse pasture to the pond in the evenings.  Occasionally one or more deer would run out of the small woods by the house to cross another pasture, jump straight up and over the fence to cross the road to the larger woods.  Just before hunting season, we often saw a family of four, one with large antlers, run across our back yard to the neighbor’s woods.  Each glimpse seemed a gift, especially as hunting season was coming.  So cute and gentle they are. We’ve seen only one lonely doe since season began. She was in the horse pasture where she used to play with her family. She must have felt Jerry’s love directed at her. She looked up and they stared at each other for some time.

Alabama woods are rapidly disappearing.  The many turkeys that were here when I first came seem to have been most all killed or hopefully, found a safer spot.  Jerry and I eat fish and seafood, as he needs their protein, and I sometimes have a little red meat, so we are not vegetarian.  Still, I hope people will raise their consciousness to let Mother Nature control wild populations.  She knows what to do.

Being Creative ~ What We’ve Been Up To

As a part of God, our souls each a part of the one God Soul, we can’t help but create.  Creating is all we do, whether knowingly or blindly, so Jerry and I prefer to work at being Conscious Creators.  We partner with Spirit by choosing what we want that’s in line with God, becoming steeped into a sense of reality that integrates our choices into all we do, and recognizing the synchronicities brought our way.  We had many “coincidences” in creating the studio, so we knew our higher selves were involved.

This really works.  Maybe you’ll want to give it a try.  Of course, make sure you know what you really want to choose.  I hope you enjoy hearing a little of what we’ve chosen and how we went about creating it.

How We Evolved Our Choices of What to Create

We’ve chosen to work with plants, but that is our second priority at the moment, except Jerry is clearing trails through the woods, outdoor work that he loves.  He needs it, too, as he is very connected to spirits of nature.  Now our priority is to ramp up our arts and crafts activity.

The idea of a studio expanded from a sewing room for me, to apparel design, which I studied a bit in college.  About 50 years later, I’m happy to pick back up on the design process. I chose two “Workhorse” sewing machines that have the advanced sewing features I wanted, plus embroidery and quilting features that happened to come on them, too.

I was pleasantly surprised that Jerry also wanted to sew and embroider.  His first project was to create his own original machine embroidery designs on Hatch software, which outputs designs to run on either of our machines. In the process, he learned a lot and made some Christmas gifts.  I learned as he accomplished.  This week he’s been turning a photo of a hawk into a machine embroidery pattern, learning more about the Hatch embroidery digitizing software.  It’s baby steps for me.  I’m using designs built into the Bernina machine. I chose a simple but graceful, three-color flower design and used the stabilizer (backing) that Jerry used for the same cotton fabric.

My Practice Piece on Cotton

Of course, I wanted to make myself some leather bags.  I began looking into a heavy-duty sewing machine—maybe a Sailrite.  Jerry said he’d like a machine that could sew heavy knife sheaths and gun holsters.  So we had to go with a HEAVY leather machine that can take any leatherwork we can imagine.  We’ve since learned that the Workhorses can handle lightweight leathers.

Right now Jerry’s in the woodworking shop, making a leather tool holder.  He has materials ready for making a tooled gun holster.  Of course, his leather is not dyed; he’ll do that. Taking baby steps again, I chose already dyed leathers for my first bags.  They will not be tooled.  I bought 3-4 oz. leather (a thickness measurement) for a couple of bags, then realized it is too thin for the leather machine. I’ll sew bags of that leather on one of the Workhorses.  I bought 5-5.5 oz. leather for heavier bags that will be my first projects on the leather machine.

I’ve wanted a weaving loom since my high school days and I picked out an economical Leclerc.  I’m glad that Jerry, once again, got interested and bought a Schacht.  Good thing we will never have to upgrade it, as it took him 6 days to assemble it in a bedroom and it would have to be disassembled to take it out.  A better method of removal might be to knock down a wall and rent a crane.  No, we’ll have this one forever.  I’m confident in one day producing high quality denim, fine linen and silk fabrics on that loom, but it will be years before I can get Jerry off it.  His first project looks quite good for a beginner.  He has the loom half warped for his second project, a dining table runner. 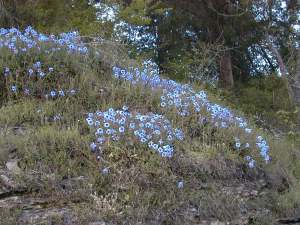 Flowers on a Cliff along the Tennessee River

It took awhile, but we’ve put together all the tools we need to get started.  Lots of books, too.  Along the way, my interest in textiles expanded to fiber and mixed media arts.  That’s a little complex for me to define. It includes use of fibers (yarn, cloth, threads, or wool, ex.) to go beyond traditional needle arts and sewing, beyond use of dyes and paints to create traditional cloth (surface design), to making abstract or realistic “paintings” via stitches, felting, paints, metals and just about anything else an artist might want to incorporate. The end product can be something to hang, to wear, or whatever. The makers in this type of work are inspiringly creative.  Possibilities are endless!  Here’s a photo of flowers that Jerry took from the bass boat.  A fiber artist could have a ball creating a work starting from this image.

So Jerry’s concentrations at the moment are weaving, leatherwork and machine embroidery; plus his outdoor work.  My first “semester” of my self-designed study of Apparel and Textile Design will consist of:

Jerry already has some artistic background.  Me, not so much, besides music, but I’ve given up my life-long idea that I am not imaginative and can’t draw.  Following Kryon’s suggestion, I’ve told my Akash (memories of other lifetimes, stored in my DNA) to bring forward more artistic skills.  I AM an artist!  Right now I’m in the sewing area of our studio, looking out the window at “fiber art designs” in the trees and meadow.

I took the title of this article from a line in a Timbuk 3 song, switched up a bit.  Their line is “How well do we use our freedom to choose the illusions we create.”  I changed “illusions” to “reality”, because neither Jerry nor I agree with the notion that all is an illusion.  Reality IS real.  We simply don’t yet understand what it is and we are only now ready to learn how it is created.  In the New Energies science has already begun to learn about the effects of Consciousness on the physical and that it changes the probabilities in any situation.  Our task is to learn to control our personal and collective realities.  Timbuk 3 is right.  We have the freedom of choice.