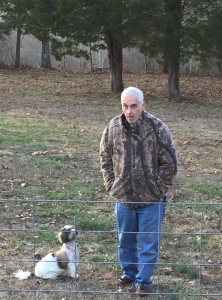 Looking out the back window here in the kitchen, the fog comes up from the hill of the pasture, into the yard, this morning.  53º F in socked feet and no jacket was too cold for me, when I stepped out on the front porch for a moment.  I heard many birdsongs, but see no activity out back, but for one squirrel face pointed downward on an oak trunk, sniffing the air.  We have a new bird feeder just outside the window, but no takers.  I think it needs to be further from the windows.

I’m back on track with piano practice.  I learned very quickly, last year, but when other things took priority over practice, my skills lessened just as quickly.  I’m learning from books—mainly, Alfred’s Basic Adult All-in-One Course, Books 1-3.  First I skipped learning the chords, because I just wanted to play reading music.  Then, I began to see how knowing the chords enhances playing, even with the music.  I started practicing chords, scales, etc.  And I discovered Hanon’s exercises for strengthening the fingers.  It’s all very good for completing the nuances of brain restoration after a stroke!

Jerry took off early for his Botanical Illustration pencil drawing class in Huntsville.  I’m so pleased he’s enjoying it.  It’s a pretty quick pace, with five three-hour classes in just short of two weeks.  I hope he’ll continue on to the February class.  He loves every little plant and I expect he’ll spend hours in the woods, drawing them.

I wish he could take Little P with him to the woods, when he draws, but he wouldn’t be able to watch him closely enough.  For now, it isn’t safe.  We have seen wolf dogs on the loose a couple more times, as have neighbors, since P was attacked.  We first brought P home from the hospital with some big holes still open.  It was worrisome to see him wallow those open holes in the grass and dry leaves.  They probably itched.  On the second checkup, the vet said they all looked good.  He wasn’t worried about the dirt hurting the wounds.  They bathed him and stitched up all the holes.

Progress on the Fencing for Little P

Jerry has finished the back fence extension for P.  We’ve received the front yard fencing, and Jerry put in the first post, yesterday.  By the time it’s done, I hope P’s hair has grown out and the nights are warm enough for him to sleep on the porch, overlooking his newly restricted kingdom.  He loves that porch.

A Visit with a Sister 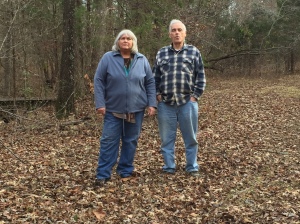 Before Christmas and the cold spell, we enjoyed a few days’ visit from one of my sisters, Dee.  She’s the one I’ve been telling Jerry he should have married, which he doesn’t like me saying.  What I mean is that she’s more outdoorsy than I am and knows a LOT about plants, as he does.  She’s been studying and making medicines and healthy stuff from herbs and native plants.  I wish we could live closer, but Jerry won’t move from here and Dee’s sold her chickens and Angora goats, planning to move to the North Carolina Appalachians.  We walked through the woods, with me looking up at birds and them pointing out and discussing all the trees and little plants, noticing deer tracks and groundhog holes. 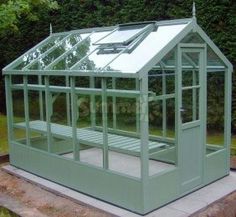 Lauderdale Will Soon Need One or More Herbalists

Herbal medicine is more up my alley, but I’ve never made them.  I intend to get a greenhouse this fall or next and to start propagating native plants.  This area will need someone to make real medicines when the People have rejected Big Pharma.  I have too many projects in mind to do it all myself, so I may have found a budding herbalist in a neighbor.  First, I’ll have to learn something about greenhouses.

Over a month ago our new deck roof caved during its first good rain.  The company that installed, Alabama Awnings, did not want to stand behind their shoddy work at all, until Jerry suggested that we let a judge decide.   Then, every week, they said they’d call on Wednesday and didn’t, with stories about not having any work, due to lack of materials.  Meanwhile, they were calling a former employee, wanting them to come back and work for them, because they needed more help.  Supposedly, they will be out here on Monday.  I have my doubts.  I’m ready to call our lawyer, as we should have gone ahead with in the first place.  I’ve almost decided to name names in a page on recommended and not recommended companies.

Last year, we bought a little rental house.  It’s ceiling caved when the uninsulated water pipes in the attic couldn’t take the 12º night!  We are lucky that this time, it’s an insurance issue and will be quickly repaired by those who belong on a reputable list.

Now, looking at these problems with buildings, we know that we created them, just as we have created everything in our lives.  It’s not like it didn’t take 7 months for an as yet unnamed contracting company to complete the cobbled up porch and finally send in professional roofers to stop its roof from leaking.  It’s not like we didn’t have an air conditioner water drip leak that caused a massive gas leak for which a huge area of flooring was ripped up.  What about the basement leak in Jerry’s woodworking shop?  That’s been there for awhile, and was THE priority, before P was hurt.

It behooves us to figure out what fears, beliefs, or emotions are behind these problems.  Hmm, a lot of this is about water.  Water carries emotions and memories….  Jerry and I will have to consider that.

After posting, I mentioned to Jerry that I had added the last section about creating problems and water.  He agreed and reminded me of the busted water pipe incidence in his Mother’s house, that occurred not long before he meant me.

Oh, yes, there was also the damaged pipe to the back yard spigot, last summer, for which we called a plumber.  And I failed to mention a separate small roof leak in the same rental house with the burst pipes.

Wow, once you start looking into themes of problems, it can be amazing!  We had better take some of all that water and clean up our act.